We concluded on July 3rd, 2018 that a cyclical correction is likely to start for European equity indices during 2018. Moreover, our main point back then was to show that the correction is unlikely to end in another great depression. Past week’s market action support the assessment that European equities reached a cyclical peak at some point during 2018. Price action since mid-Summer raised odds for a bear market in Europe.

The majority of European equity indices paint a bearish mid-term picture. They violated mid- and long-term trends during the weakness of the past few months. The first chart below shows the German DAX index. It broke the dotted trend support clearly during the most recent sell-off. This trend lasted all the way back to the financial crisis in 2007-2009. The past two breaks of an equivalent support in 2011 and 2015 have led to larger downside action after the break occurred. Moreover, the timing of this break occurs very late in the cycle if US American standards are taken as a basis of measure. All in all, bearish evidence mounts for the biggest European economy. Germany was among the top performers in Western Europe over the past decade. This positive trend probably ended in 2018. 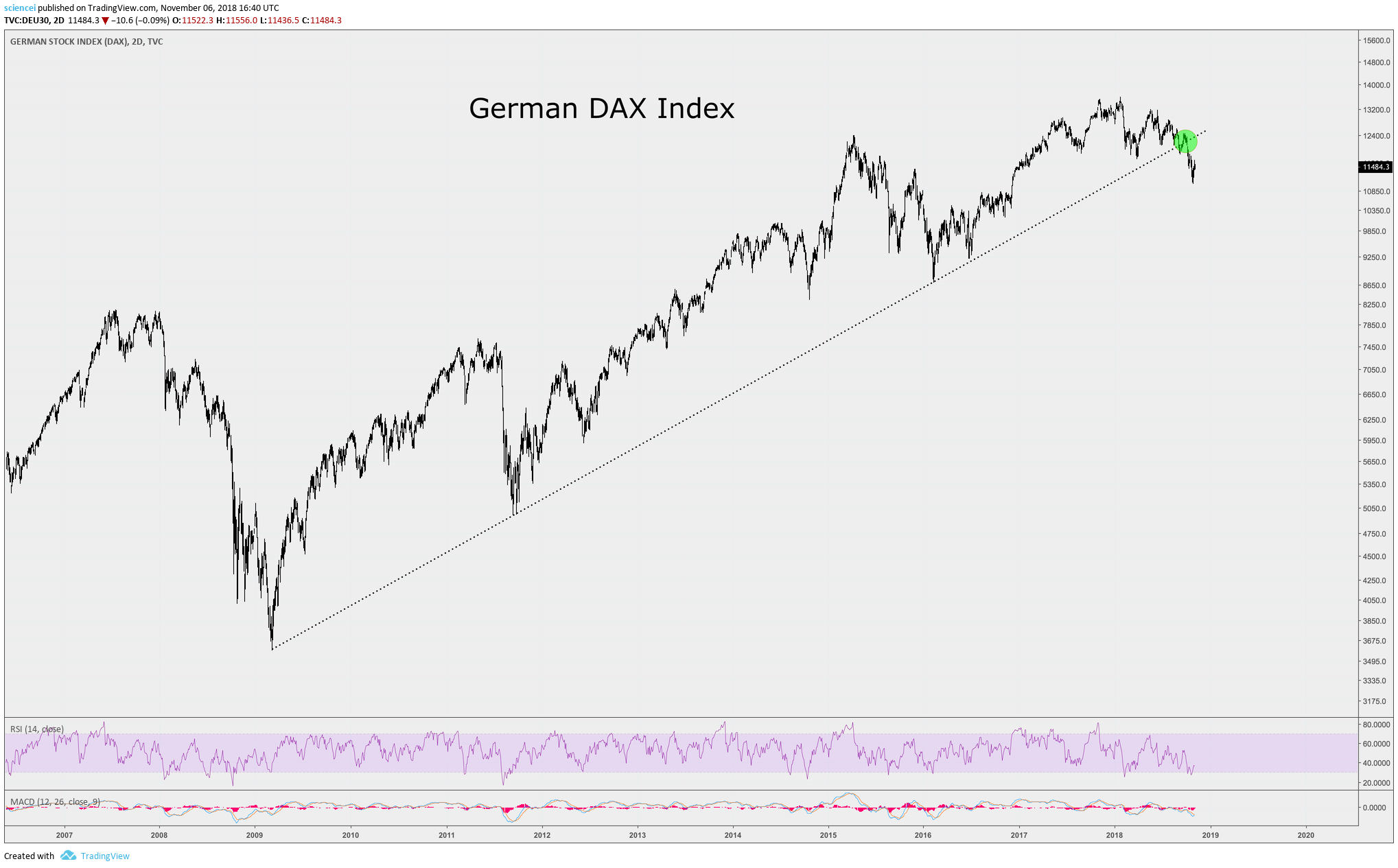 The Eurostoxx 50 is the most liquid equity index in Europe. It provides a good gauge of what is going on in continental Europe overall. The broad equity index has reached its all-time high in the year 2000. This means that the major continental European equities, which are included in the Eurostoxx 50 index, have been tracing a sideways pattern for the past 18 years. Investors who bought the Eurostoxx 50 in March 2000 have lost money until today. The bullish cycle since the end of the financial crisis 2009 did not lead to a new all-time high. That is contrary to the major US equity indices. Instead, the bull cycle took the Eurostoxx 50 into a multi-year resistance. Prices got rejected from that contracting triangle resistance, which is highlighted in red in the first Eurostoxx 50 chart below. Subsequent price action broke the medium-term trend, which is highlighted in lighter green (starting 2016). The Eurostoxx 50 broke that lighter green trend channel, retested it, and unfolded to the downside. As a result, a new downside trend started forming during the past few weeks. That kind of action is clearly bearish in a technical analysis framework. The new downside trend, which formed as a result, is highlighted in darker green. 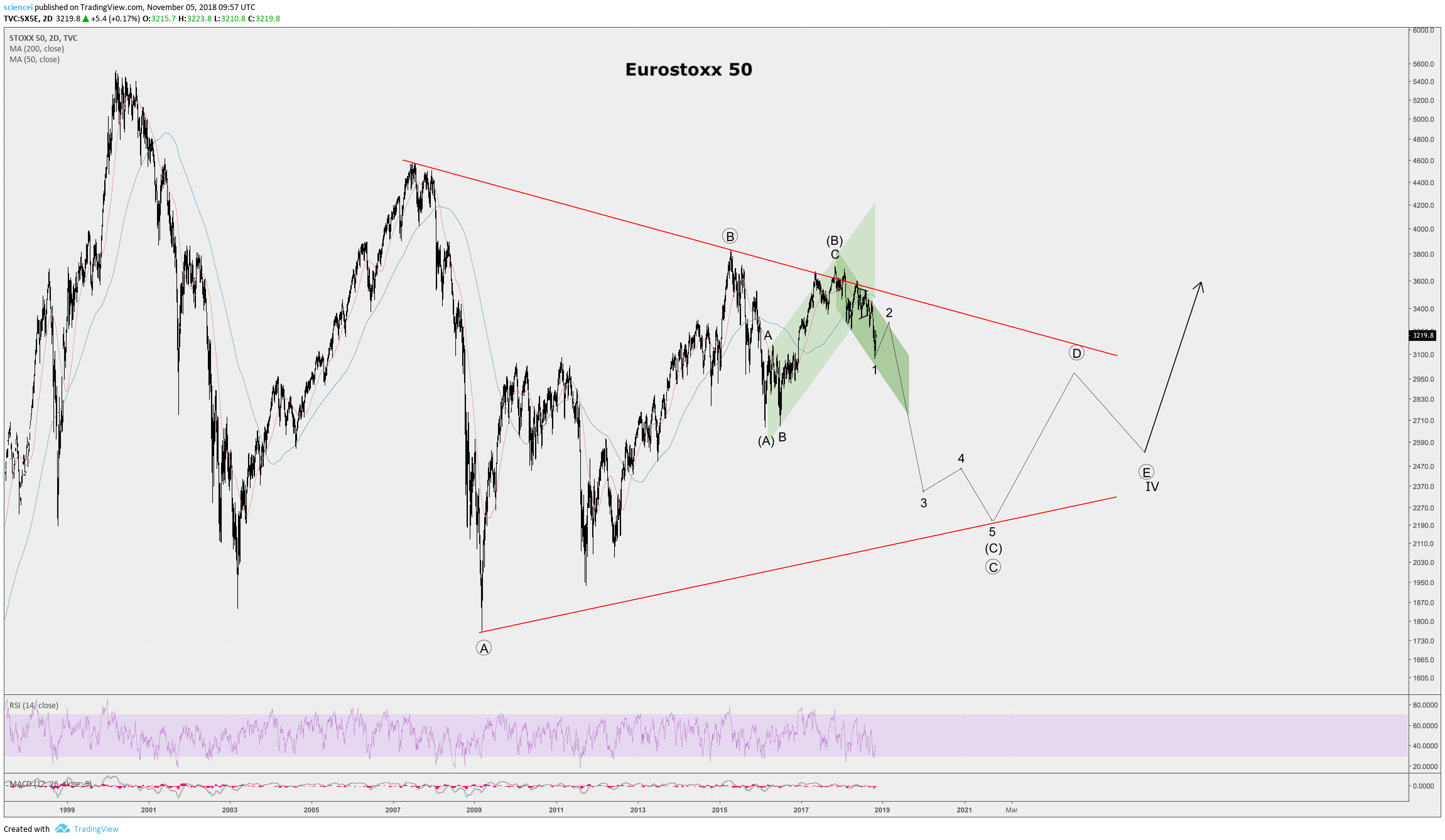 Roughly speaking, Europe can be divided into the strong and the weak markets. Strong markets are for example Germany, Great Britain, and the Scandinavian countries. Weaker markets are found in countries like Greece, Italy, and Spain. The difference between strong and weak markets is simply the point in time these markets reached their all-time highs. Weaker markets have not reached new highs since the year 2000 or 2007. Stronger markets reached a new all-time high in 2018. Overall, sentiment indicators are shifting down in Europe. The sentiment gauge below is from the website tradingeconomics.com. It shows the biggest downturn in sentiment since the European crisis in 2011. This is another piece of evidence that most of Europe is in a downside price/sentiment feedback loop. The drop of nearly 20% in the German DAX index certainly increases odds that this negative loop is now also spreading to the strong markets. 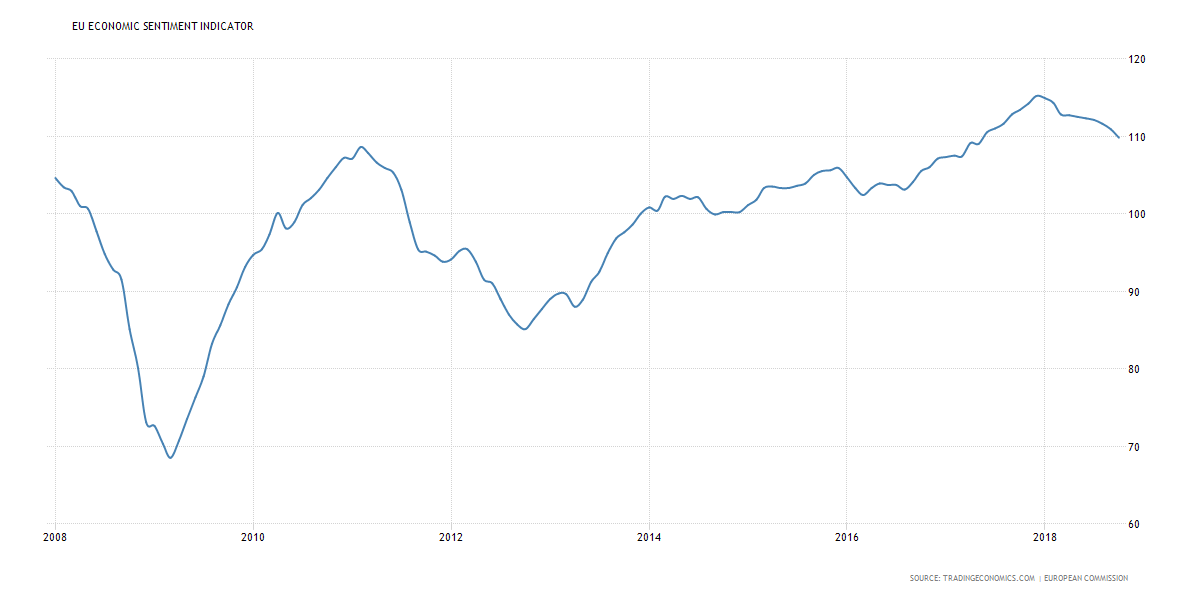 The majority of European equity indices are confirming the Eurostoxx 50. Europe is most likely within a cyclical correction as we forecasted on July 3rd, 2018. Equities in the old continent appear to be within a secular correction. The next couple of years are likely to show another cyclical swing to the downside, which is a fractal of the secular bear market. There are risks and opportunities along that. Obviously, it doesn’t make sense to buy-and-hold European equities if our analysis proves to be correct. Nevertheless, just as investors buy the dips during bull markets there is also case to sell the rally in European equities. Inverted ETF’s or short derivatives offer a possibility for doing that.

The short-term chart below shows that a bearish motive wave from the 2017 top formed in the Eurostoxx 50. This implies within the Elliottwave framework that at least some form of bearish price action follows. It is also confirming evidence that Europe is within a cyclical correction. The bear market is probably still at an early stage. A counter-trend rally is likely after the sharp sell-off, which reached almost the bottom of the darker green trend channel in the short-term chart. The rally could carry prices even above the darker green channel into year-end. However, the trend remains down as long as the red solid line is not crossed to the upside. The bottom line is that the current rally will most likely set the stage for a bigger sell-off during 2019. A year-end rally is likely to unfold and turn out to be a big bull trap for European stocks. 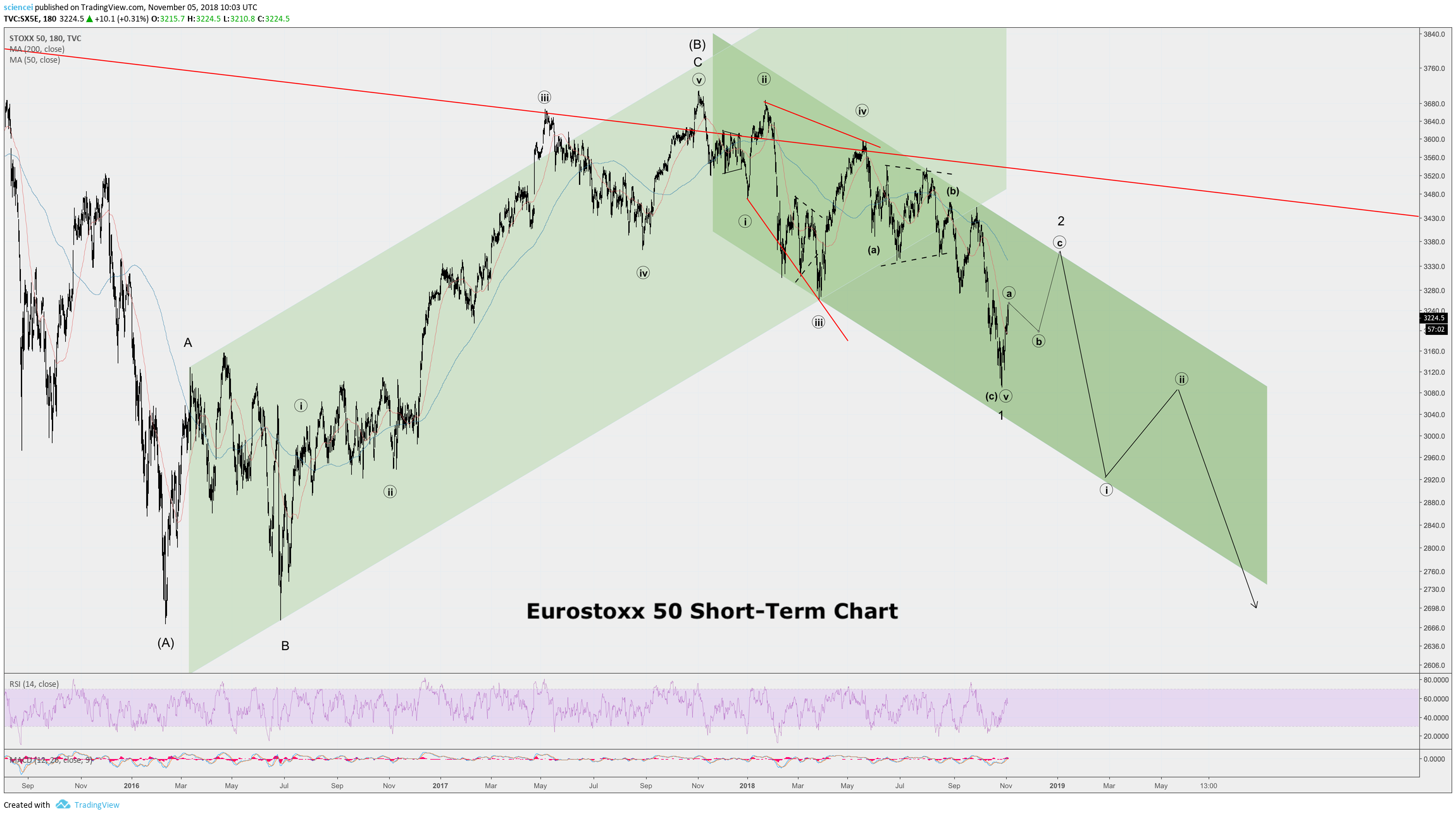 Our premium short-term analysis focuses on identifying dips and countertrend rallies within their paramount trends. It covers four of the major European equity indices.