This article is an update to the view that we expressed here on Silver during the past couple of months. The precious metal apparently broke through a bearish mid-term trend support as we publish this article. Therefore, it is reasonable to reassess the outlook for silver.

To recap briefly, we presented a long asymmetric risk/reward trade idea on November 15th, 2019. The nearest silver future was trading slightly below $14 back then. Subsequently, it rallied close to $16. On January 10th, 2019, we concluded that a correction is likely as silver approached a mid-term trend and made a case to buy the dip. Subsequently, a correction unfolded and reversed to the upside. Does this imply that the silver train is leaving now to the upside? We have to dig deeper into its price action to answer that.

Silver pushed through the mid-term trend support as we submit this write up. That is the upper boundary of the darker grey trend channel in the very first chart below. The breakout attempt got confirmed by gold as well. Both precious metals broke through their respective downside trend supports that dominated price action since 2011. That is a cross-market confirmation signal, which is constructively bullish. However, a breakout is not a done deal yet. Trend breaks of larger degree trends are most often not a hit and run event. They tend to get retested before a breakout gets confirmed. The actual breakout usually unfolds after a retest. The Elliott wave structure in silver is most likely setting the stage for a retest as we submit this write up. 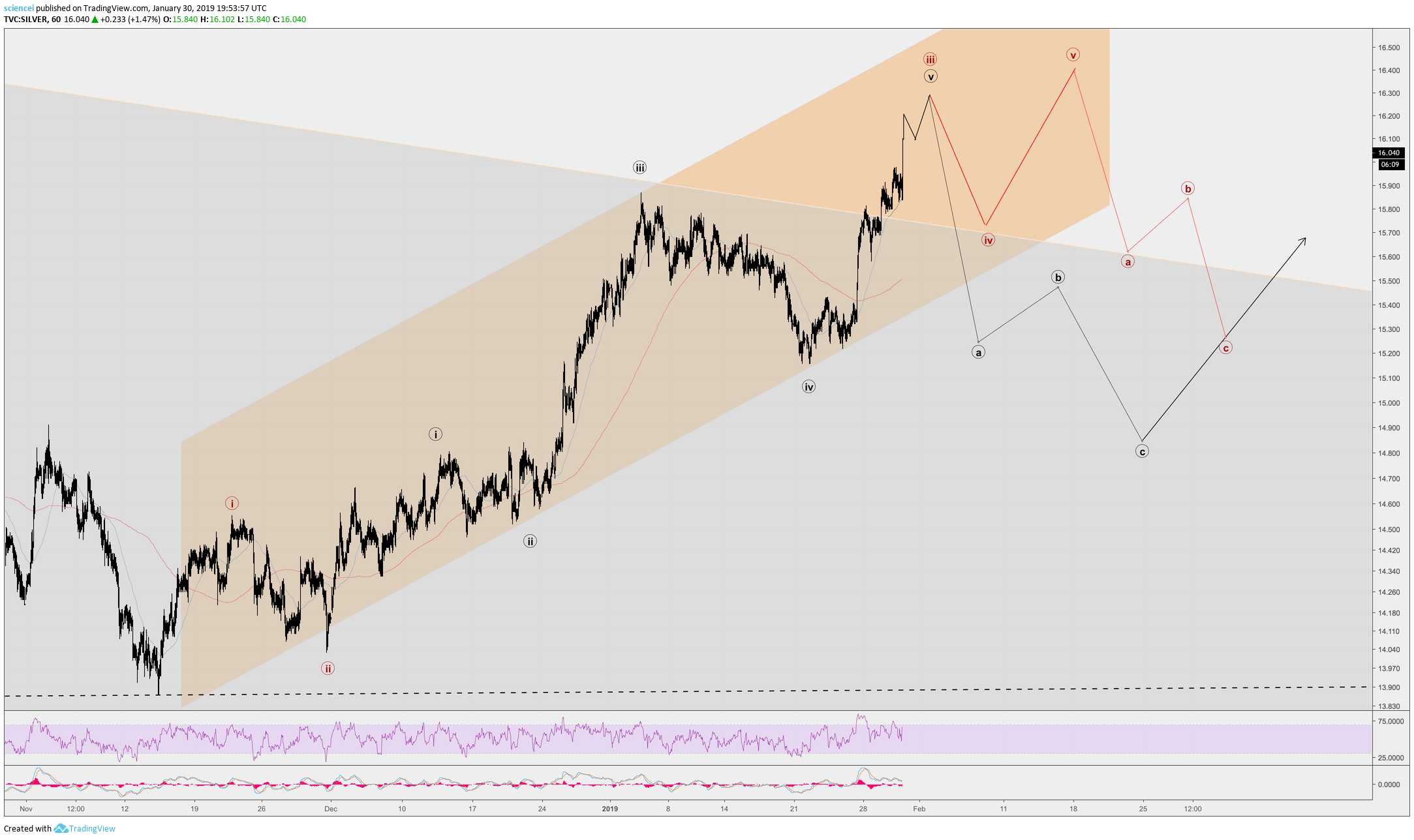 The two most likely scenarios are depicted in black and red. The good news is that both have similar implications. The black plot shows a nearby fading impulse from the August 2018 low. Alternatively, the red scenario shows another down-up sequence. Both patterns require some form of correction. Moreover, both patterns resolve to the upside eventually. The main difference between both is that the red scenario swings an additional wave to the upside. An ambiguity between both situations arises due to the price action around the November 2018 bottom. Price action into mid-December 2018 can be interpreted as either one or two Elliott waves to the upside.

Regardless of which scenario plays out eventually, the conclusion is almost identical. The most sizable correction in silver is most likely to unfold within the next few weeks. Most sizable refers merely to the biggest price retracement since November 2018. The same conclusion applies to the entire precious metal spectrum. Gold and platinum display similar setups. Gold is very close to completing a minor degree pattern from the August 2018 low. A complete Elliott wave pattern leads to a trend reversal. Hence, precious metals are likely to show a downside bias over the next few weeks. That correction will be most likely an attractive entry opportunity for more upside down the road. The paramount trend for silver is up. The pattern that unfolds within the orange trend channel is not only bullish. It also signals a bullish continuation after a correction.

All in all, it is probably not the right time to chase the allegedly departing train to the upside right now. A sizable correction in silver is most likely ahead of us. The technical pattern in silver implies an upside resolution of that correction. Hence, investors are probably better of on focusing on buying the dip.