Our outlook painted a bearish picture for European equities during July 2018. We concluded that “A correction is highly likely. It will be probably the biggest and longest market drop that we’ve witnessed in a while.” That forecast proved correct already. The second half of last year erased substantial value in European equities. The German DAX index, representing the blue chips of Europe’s largest economy, lost a quarter of its value in the previous year.

The fractals in the German DAX index unfolded in an unorthodox manner since late 2017. The index marked its all-time high with a rare pattern. A 3-wave advance led to that high. Subsequently, German equities embarked on a multi-month correction. It displays sharp and overlapping swing characteristics. These fit best to a bearish expanding diagonal pattern.

The latest rally has not only carried German blue chips roughly 20% higher. It also took sentiment back into “normal” territory. The pessimism that prevailed around the end of last year disappeared as equities rebounded. Sentiment indicators painted a balanced picture over the past couple of weeks. Moreover, retail investors currently show a relatively high investment proportion in German equities. That is not the typical picture, which has been observed at the end of cyclical corrections historically. It probably hints to the fact that the DAX is still within a cyclical correction!

The end of May probably also marked the end of Theresa May and the end of the rally that unfolded since late December 2018. An overlapping pattern that shows gaps and sharp swings to the downside broke the pale grey trend channel in the chart below. It encapsulates price action of the latest rally. The break signals that the DAX could be already within the early stage of a final A-B-C zigzag pattern to the downside. The zigzag is part of a paramount expanding diagonal pattern.

Yesterday’s break of the previous swing low around 11,840 along the break of the critical 2,800 level in the S&P 500 index is undoubtedly a short-term bearish signal. The drop from the early May recovery high counts best as a 3-wave bearish sequence. It is probably a fractal of the bearish zigzag mentioned above. However, the DAX has to continue its progress to the downside swiftly if that case is correct. Wave structure arrived at a stage that should show distinct characteristics. An immediate downside acceleration on increasing momentum has to be recorded soon. More importantly, the previous sequence of lower lows and lower highs must not get invalidated in the form of crossing a previous lower high to the upside. Last but not least, crossing the red dotted horizontal S/R in the chart below spoils the bearish party altogether. The level runs around 12,304 points and its invalidation complicates the short- and mid-term DAX fractal structure entirely.

The expanding diagonal pattern hints to relative underperformance of the DAX index during the next weeks. We expect the index to cross below 9,000 points. It is not surprising as Germany is a big exporter and benefits from globalization and a weak Euro. Free trade and globalization are under fire these days. The trade war narrative is likely to spoil the German success story short term. As a result, equities of the German Exportweltmeister could disappoint just like “Die Mannschaft” as the reigning World Champions during the last Worldcup.

The bottom line is that the table is set for a larger decline in the DAX. It needs to materialize soon or gets discarded otherwise. Stated differently: The briquettes have to catch fire. Otherwise, they’ll get pouring wet. Any piece of bearish news flow has a high potential of igniting the fire at the current stage. 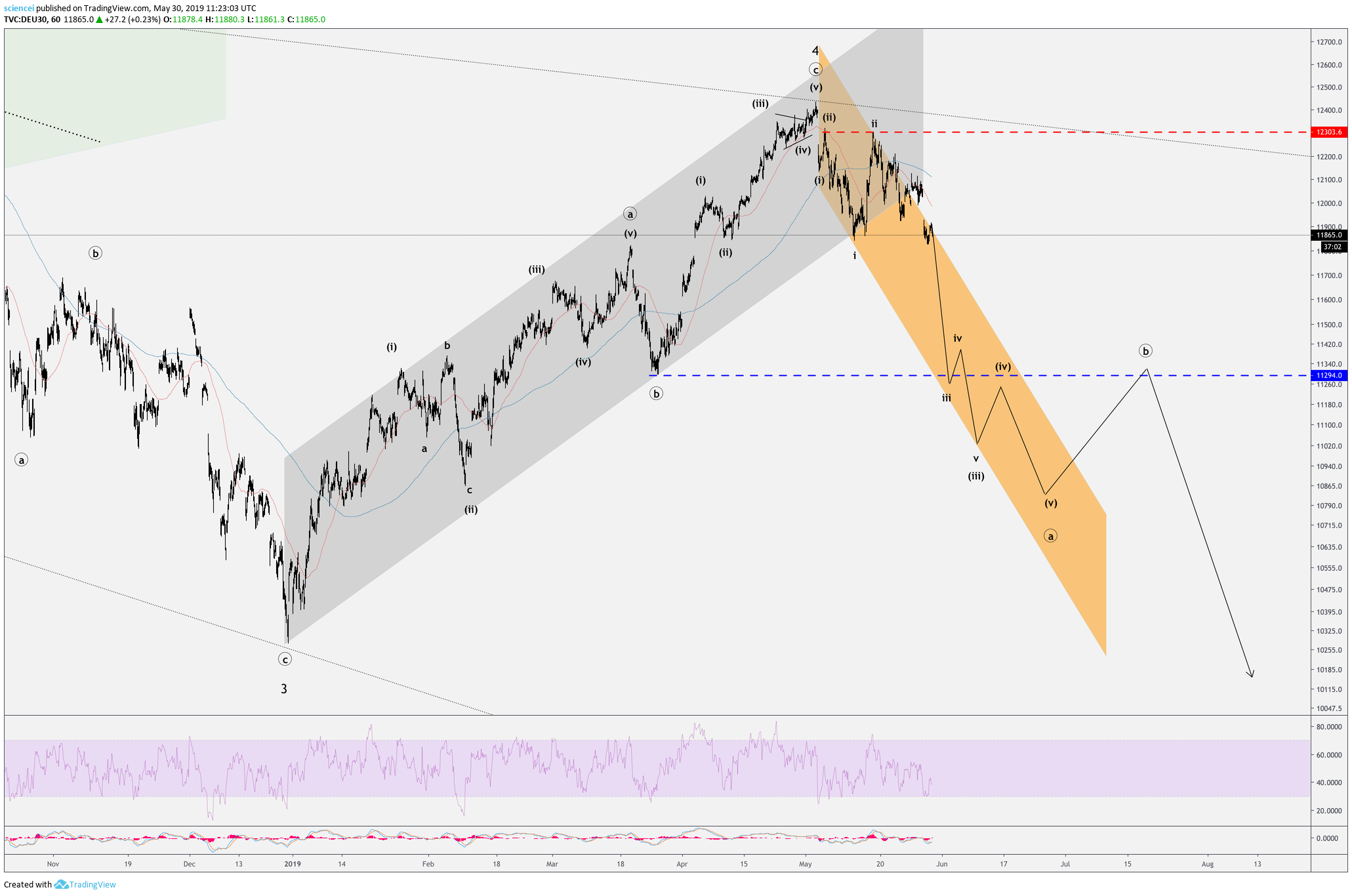