Nobel Laureate Robert J. Shiller found in his early research that historical dividends can be modeled as a relatively smooth time series. Moreover, this function can be used to interpolate future dividends with high accuracy. This is depicted in the graph below by the function “PDV, Constant Discount Rate”. The graph is taken from the Journal of Economic Perspectives, Volume 7 Number 1, published in 2003. 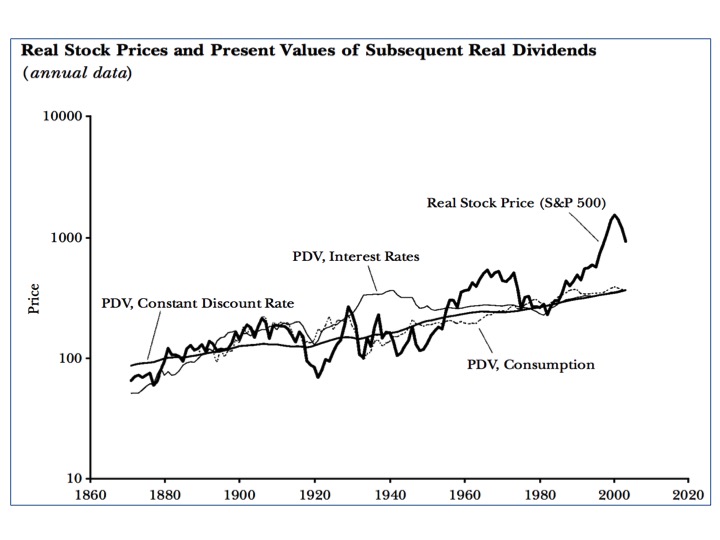 What is so significant about this? Finance courses at the top universities teach their students that the value of a stock is the discounted value of all future dividends. Those are stable according to Shiller’s findings. However, the stock market, S&P 500 in Shiller’s research, oscillates like the mood of a manic-depressive patient around the mean and fundamental value of dividends.

Despite some criticism towards Shiller’s methods in this piece of research, it appears that some other forces are at work than rational behavior of market participants. Does that mean that market participants are irrational? It does to some extent. Psychological research found evidence on how and when human decision making is prone to errors and biases.

How does this relate to the valuation of the stock market? Feedback loops can develop during stock market appreciations. Friends, relatives, and media communicate investment gains. It is quite likely that some are going to believe the story and buy into the direction of an increasing trend. This is trend enforcing and spreads out like a snowball across other friends and relatives, especially after having successful feedback with one’s own investment. Laboratory experiments showed evidence for positive feedback in investment setups. Price equilibria distant to their fundamental value was reproduced in these experimental setups.

Our methods root on evidence that psychological factors can explain valuation excesses, whereas traditional economics fails to do so. Those factors were probably at work during the tulip mania in the Netherlands, the pyramid schemes in Albania, or the south sea bubble. Valuations tend to be mean-reverting in the long run. Oscillation around long-run mean valuations develops in trends.